Xenomax is a highly heat-resistant polyimide film that has been used as a TFT substrate for rollable mini-LEDs.
It has the highest level of dimensional stability and heat resistance among polymer films, suppresses film warpage
and shrinkage in thermal processes, and enables fine wiring patterns.
It is a suitable material for substitution of glass, silicon wafers, and ceramics or laminating with glass, metal and other materials.
Xenomax is used in electronic paper, mini-LEDs, and TFT substrates for various sensors.

By creating TFT on XenomaxⓇ film, flexible displays can be manufactured.
It has been adopted as a substrate for mini-LEDs, electronic paper, and various sensors, contributing to thinner, lighter, and more flexible devices.

With a coefficient of thermal expansion (CTE) of 3ppm*, this organic film has the same excellent dimensional stability as glass and silicon.
This property suppresses warping and shrinkage of the film during thermal processes, and enables processing at high temperatures, which was previously impossible with polymers. 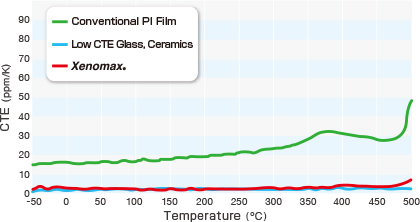 Ultra-high heat resistance: No warping even at 500°C

Conventional polyimide films warp at temperatures above 200℃.
However, due to the special molecular arrangement of Xenomax®, warpage is almost non-existent even at 500℃.
The following shows the behavior of the film when it is actually placed on a hot plate for 5 minutes 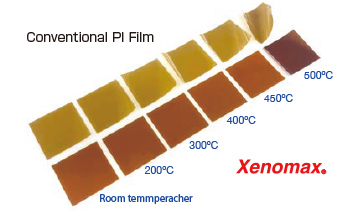 Easy to laminate and peel off from the supporting substrate.

TOYOBO has developed a unique technology to bond Xenomax® and the supporting substrate without adhesives.
By controlling the adhesion strength, it does not peel off during the thermal process and can be peeled off from the substrate after the process without using a laser.
Flexible devices can be created with inexpensive equipment.

Xenomax Japan Co., Ltd. was established in April 2018 as a joint venture between Toyobo Co., Ltd. and Nagase & Co., Ltd.
The company manufactures and sells XenomaxⓇ, a highly heat-resistant polyimide film developed by TOYOBO.
Xenomax® is used as a substrate material for next-generation devices, taking advantage of its unique high performance, which combines the advantages of polymer films, such as thinness, lightness, unbreakability, and bendability, with high heat resistance and low CTE equivalent to glass and silicon.

Inquiries and requests for materials regarding this article

Register as a member (free of charge) to view featured articles and participate in events.

Register as a member (free of charge) to view featured articles and participate in events.